Vegas had never really been on my radar – big, brash, loud and just about drinking and gambling. Nope, I was quite happy to imagine it in days of old; Oceans11 style if you must. However, I’d offered my mum a trip to anywhere in the world and she only mentioned the Grand Canyon. Being unable to get a flight into Phoenix, I was left with Vegas as the option. Not too bad, just a bit more of a drive to the Canyon and afterall, I could tick off the neon lights in the same trip.

The flight landed a little late so it was nearly dark as we flew in over Vegas and the strip was lit. Picking up a car, we headed north using as many lanes of the Strip highway as I could manage without annoying too many people. The challenge was that the hotel was on the opposite side of an 8-lane road. Fortunately, said road was acting more like a parking lot than a motorway, and a couple of indicators and nippy dives across to the left and we were heading towards the hotel for night one in the US….the Bellagio. Well, if you’re only planning on doing it once you might as well do it properly!

After discovering that hotels in Vegas position the elevators to the guestrooms at the opposite end of the hotel to the reception which means you have to walk through the entire casino (with bags), we made it. To the 25th floor. Fountain view. Which meant promptly turning all lights off and watching the fountain show from above: 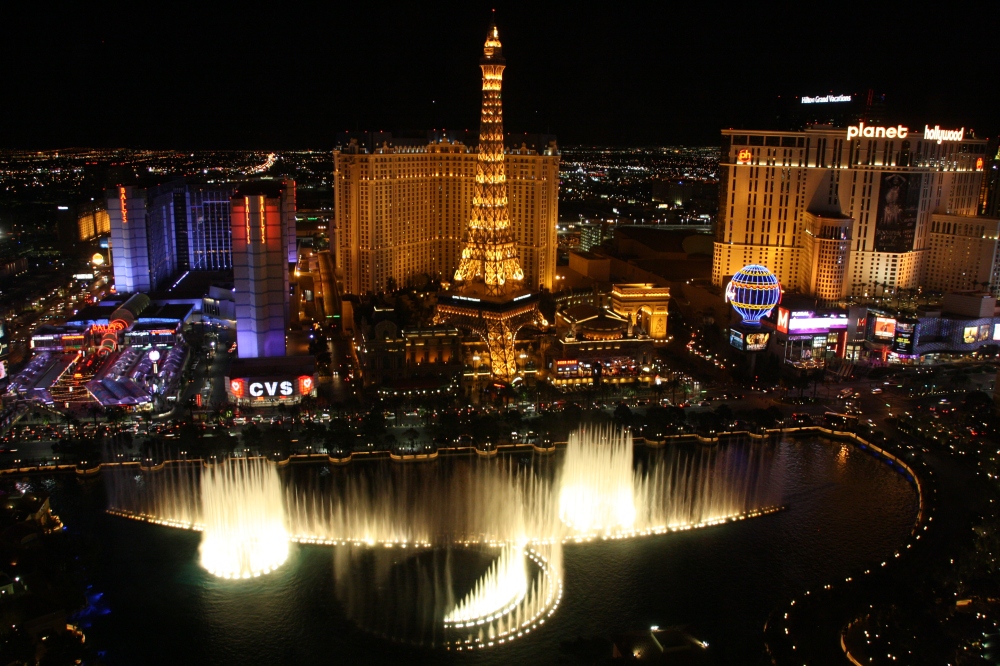 A quite stunning view. However, watching from above meant that you aren’t able to hear the soundtrack so we nipped down to fountain-side for the last two showings of the night (they are every 15 minutes until midnight).

Twin rooms at the Bellagio are perfectly set up for sharers with two very large king size beds, plentiful space and a massive bathroom with lots of towels. Sadly as we were only staying for one night we didn’t get to experience much more of the hotel.

Breakfast the following morning was across the road at the cafe in Hotel Paris – mainly because there was a beautiful terrace which enabled perfect people watching on the Strip (and the free coffee refills were quite good too)!

The drive from Vegas to the Hoover Dam is approx 45 minutes. By the time we got close, we could see a snaking line of cars. Fortunately this was a moving line and the slow progress was due to the security checking. As you approach the Dam there is a car park on the right which is signposted for the Memorial Plaza – this is the closest car park which will enable you to walk on the bridge overlooking the whole site and well worth some time: 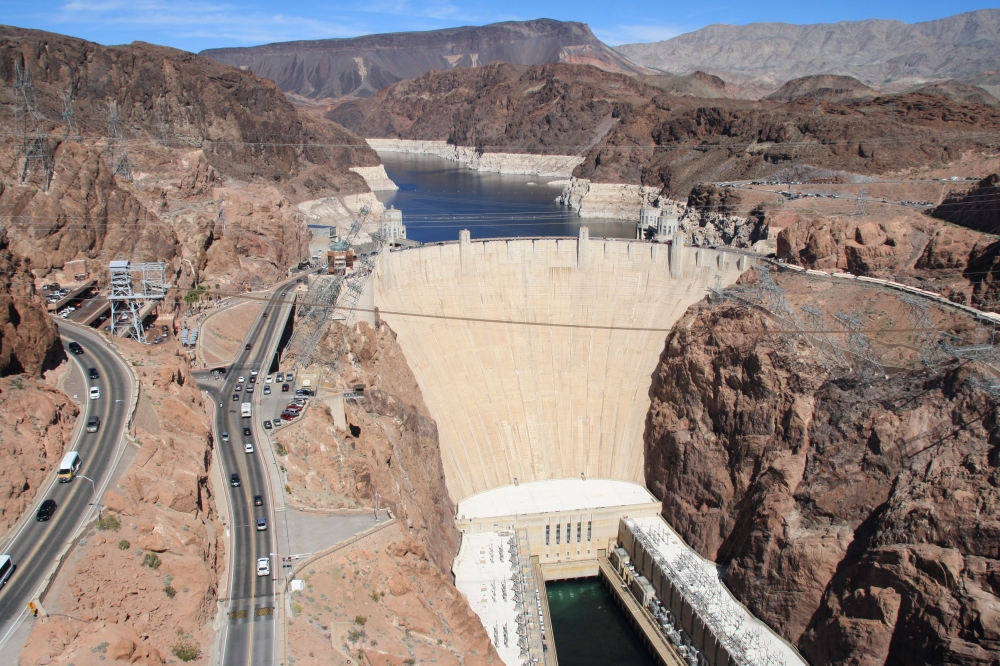 Heading further down to the Dam there are a couple of car parks ($10) and handy if you can find a space in the shade. From the car park the walk to the Dam is less than 3 minutes. Mid way across you move from Arizona into Nebraska as you cross the state line: 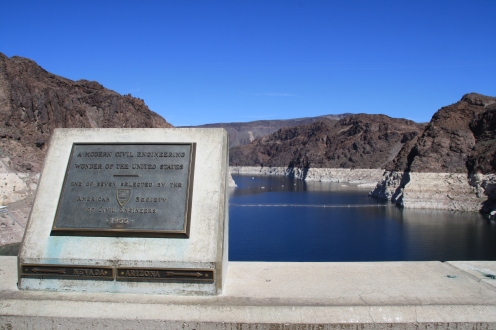 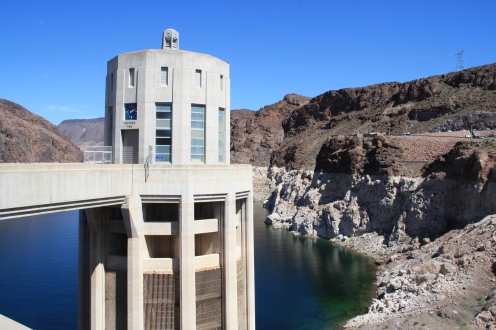 The sheer size and scale of the Dam makes you feel as if you’re in an action movie where the hero (or the villain) either abseils or dives down the dam wall. Absolutely worth a stop on the way from Vegas to the Canyon, and the best ice creams are from the souvenir shop (and not the kiosk!): 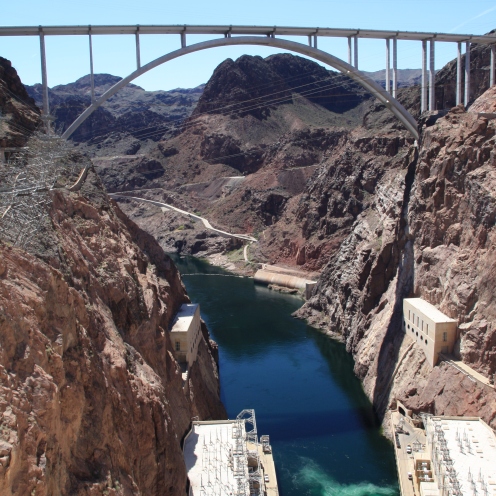 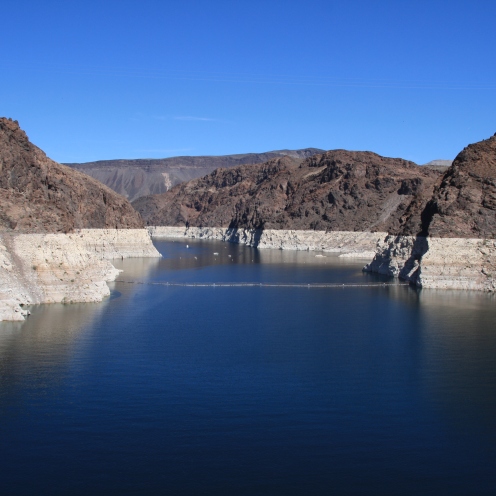 The drive from the Dam to the Canyon Village is approximately 3.5 hours. The west entrance for the sky walk is closer, however we had booked two nights at Thunderbird Lodge in the Village less than 50m from the South Rim (booking via Xanterra).

The drive is along some very long and very straight roads with not much to look at on the way….

We arrived in the park around dusk. Check in for Thunderbird lodge is at the next door Bright Angel Lodge, however there is exceptionally limited parking at either which doesn’t involve a large trek with bags. Some of the park rangers are a little officious so if you see a space (or someone leaving) then my advice is to jump into it immediately. As the whole park is run by Xanterra, rather than paying for every meal separately, you are issued with a pass which works in any of the outlets and your bill it totaled up at the end of your stay.

The rooms in Thunderbird are functional and a reasonable size – the beds are a good size but the bathroom is small and could do with a bit of an update.

We were there at the end of March and sunrise was a little before 0600. Crawling out from under a warm duvet in the dark whilst on holiday felt a little unnatural, as did pulling on several layers of clothing and a beanie. As noted about the hotel is less than 50m to the rim, so fortunately the walk to see the sun rise over the Canyon isn’t a long one. We settled on watching it from outside the front of El Tovar and weren’t disappointed as the sky turned from pink to orange as the sun rose: 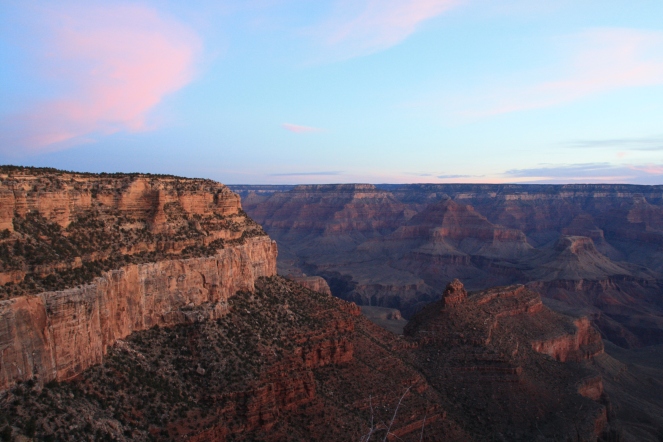 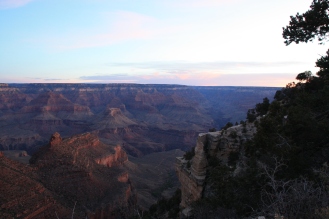 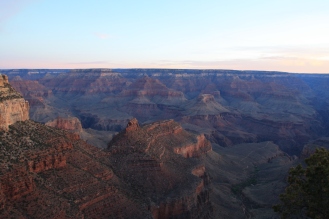 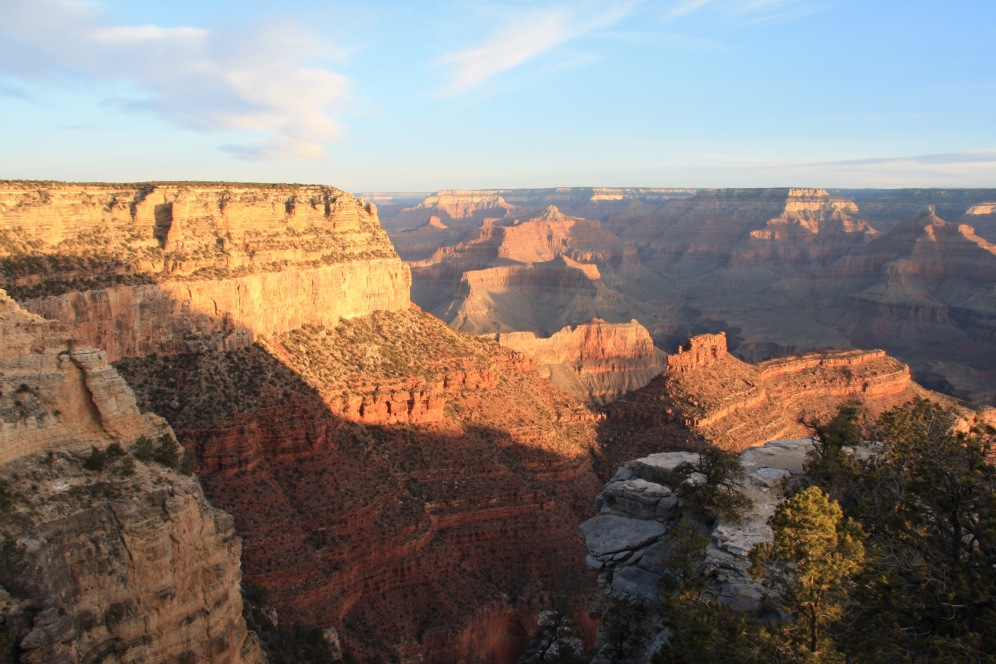 The sun was well and truly up by 0630 so we headed to the restaurant at Bright Angel for eggs, fruit and coffee.

Having seen sunrise and eaten, we were awake and it was only 0715, it was a perfect time to explore the 12km South Rim trail and start whilst it was quiet and not too warm. This trail is great. It is an easy enough walk from the Bright Angel Trailhead in the Village to Hermit’s Rest, and the trail is mostly paved which makes it accessible for anyone with with physical limitations and who might not want to walk down into the Canyon itself. This route is the red one on the Village maps and consists of 9 stops of anything from 500m to 1.8km between each. The road is closed to public traffic for much of the year, but the resort does run a shuttle bus service along this route. It stops at every point on the way out, and on three of the stops on the way back. If you’re not capable of walking the whole way you can use this shuttle as a hop on, hop off bus. My advice would be to jump on the bus to the first stop, and then walk for the next 4-5 and then use the bus to the end. Buses run every 10-15 minutes so this is a really easy and convenient option.

The views along the trail are incredible, and early in the morning, before the day trip buses from Vegas arrive (they arrive around 1100) is the best time as it is peaceful and you’ll almost have the trail to yourself. 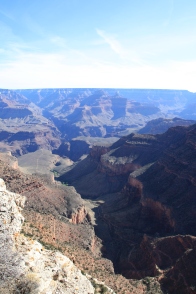 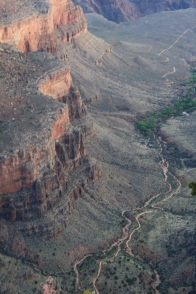 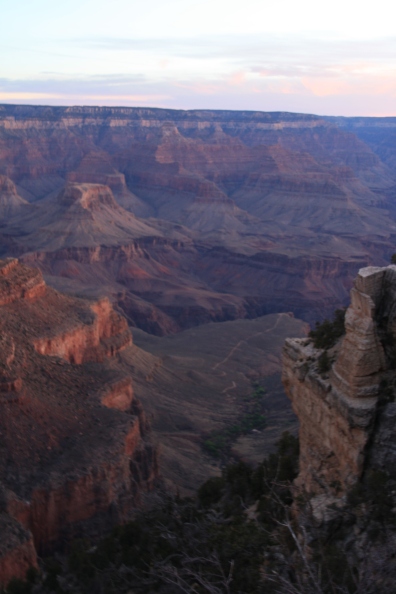 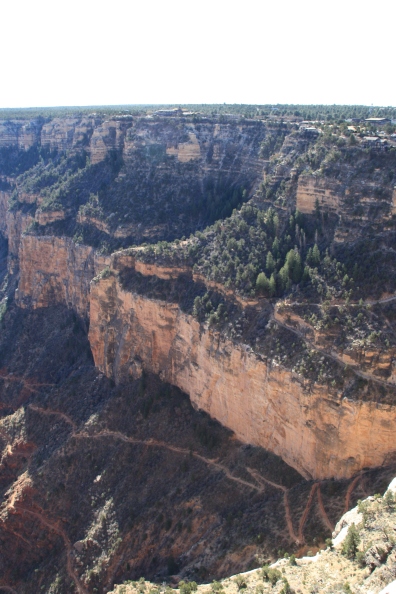 If you’re going to do this, then pack a hat, sunscreen, water and some snacks as there is only limited options for shade and water on the trail and food can only be bought at Hermit’s Rest. By the time we got to Hermit’s Rest the buses were full of daytrippers. For sunset that evening we headed out to Mather Point (blue bus route).

There are several places to eat in the Village, depending on budget and requirements. We ate at Bright Angel on the fist night (and for breakfast each day) but decided that for a special treat we would head to the restaurant at El Tovar on the second night. This is only a 5 minute walk along the trail from Thunderbird and if you’re not staying there, can be reserved 30 days in advance (3 months in advance if you are a guest at El Tovar). The El Tovar is a beautiful old hotel, which in it’s lobby has a wooden mezzanine balcony and a large dining room. The menu caters for all tastes and has a good wine list to accompany. If you can get a reservation it is well worth the experience.

Rather than head out of the park the way we arrived, we took the advice of the hotel staff who recommended the east gate and also, for ‘a couple of hours detour’ a trip up to Horseshoe Bend.

The drive out to the east gate was beautiful. We left around 0800 and the road was almost deserted. The stops along the route were plentiful and also breathtaking and the drive to the watchtower was about an hour by the time we’d had several photo stops: 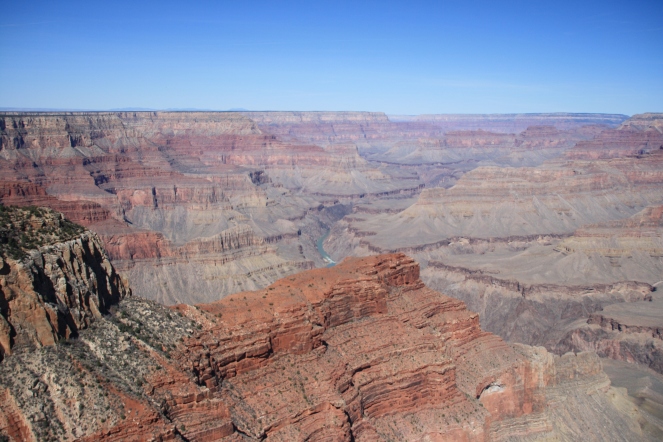 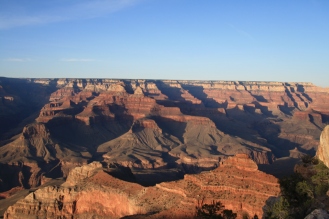 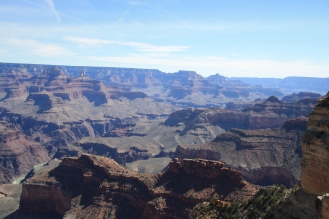 The detour to Horseshoe Bend was a little more than a couple of hours….it added about 4 hours onto our drive! It also isn’t where the map says it is (it is closer to Page than the map indicates!) but the drive past the Vermilion Cliffs and the road through them is outstanding. By the tine we got to Horseshoe Bend it was early afternoon and the volume of parked cars gave away the location. A short hike took us to the cliffs overlooking this: 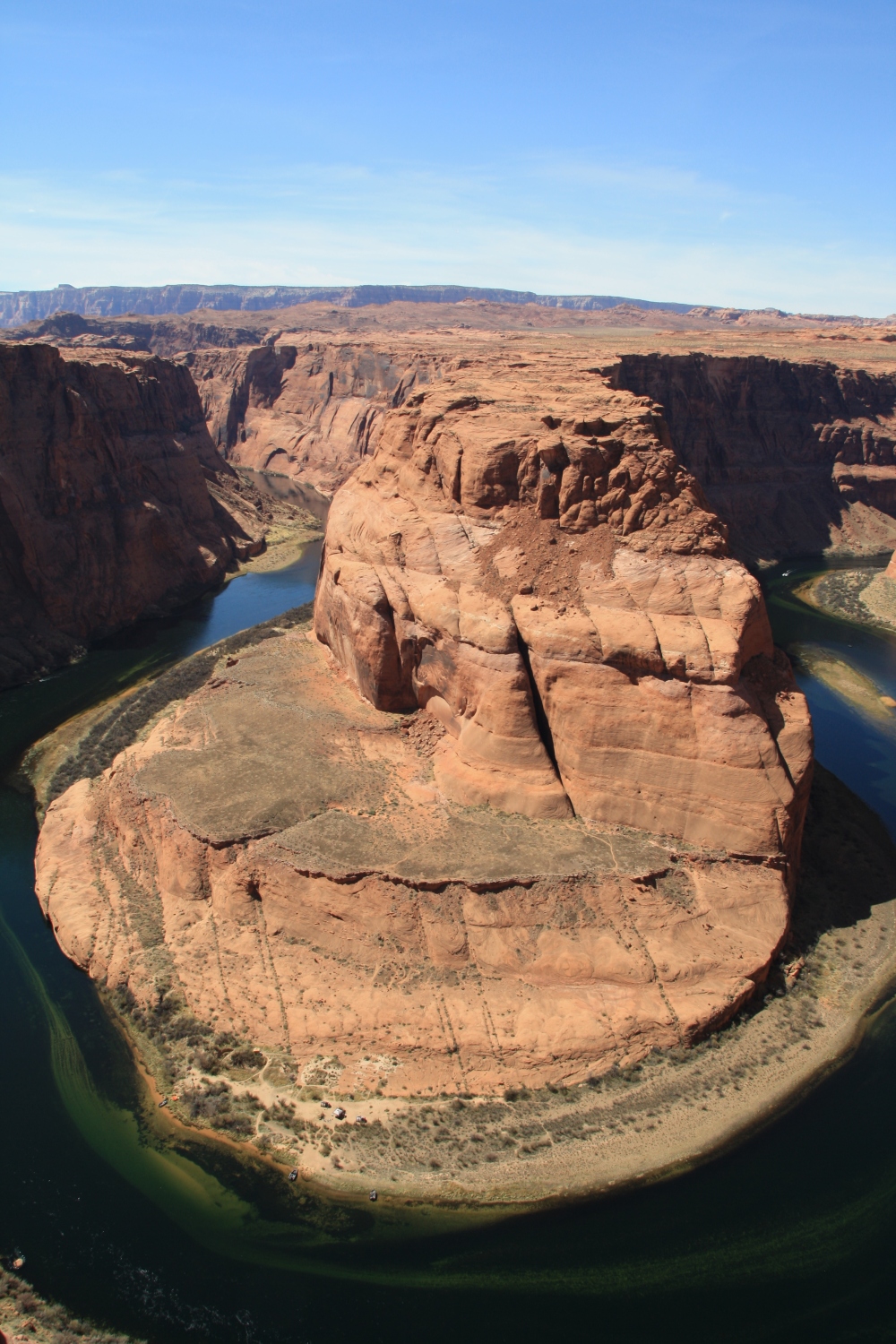 A detour which was longer than expected, but which actually was worthwhile.

The trip back to Vegas from Page took a lot longer than the drive in. In fact, it took us nearly 4 hours (on top of the 3 hours to get to the Bend in the first place) and we navigated our way to Wynn at about 1900.

The Wynn Resort in Vegas is newer than the Bellagio, but is set up in the same way – a eye opening lobby area filled with art and flowers, a large casino floor and on the outside edge, restaurants, shops and a theatre. The Wynn is lighter than the Bellagio but is no less grand.

We had a quick dinner and took in the Le Reve show – a spectacular of acrobatics, water and dance. Even though this finished at around 2300, there were still hundreds of people out and about as we wandered along the Strip, looking at the lights, shows and people.

I wanted to visit the iconic Welcome sign which is at the south end of the Strip and the quickest way to do this (and best if it is warm) is to get an $8 bus ticket which is valid for 24 hours and allows you to hop on and off. The sign is past the Mandalay Bay and even though we got there mid morning, there was a queue. If you’re not too bothered about having a straight on shot of you and the sign, you can sneak in at the side and get a photo done quickly: 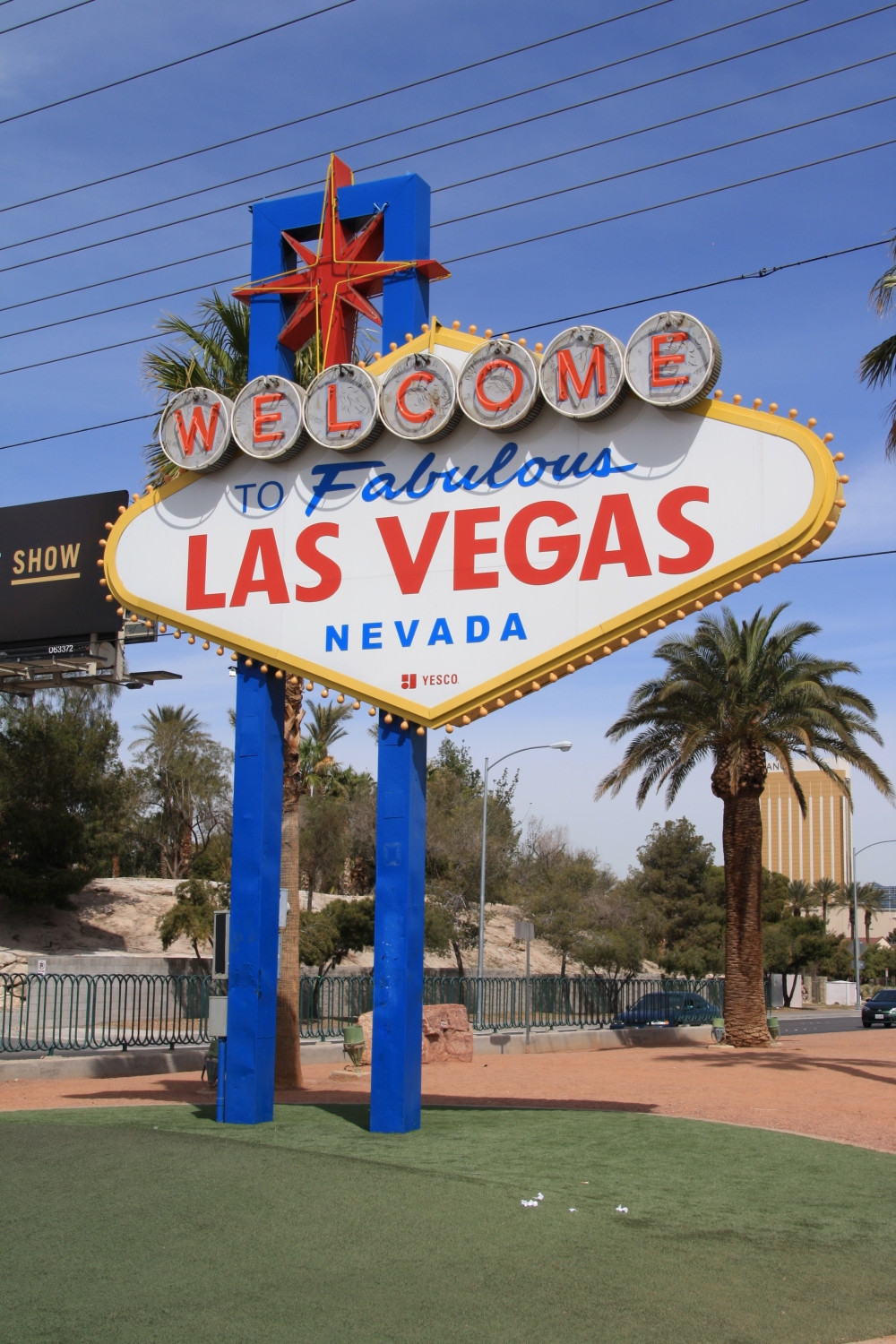 Ultimately the trip was for the Canyon, but I fell in love with Vegas – its inclusivity, its life, its acceptance. The loud, brash, neon city in the middle of the desert is fun, welcoming and available to everyone. I’m sure there’s more than a fair few people for who Sin City lives up to it’s nickname, but there is plenty more to it.