Iconic in its design and recognised by millions worldwide, Marina Bay Sands is one of those hotels in the world whose experience you can’t replicate elsewhere. And so a trip to the city state is virtually incomplete without either a drink at its rooftop bar (Ce La Vie), dinner in one of its many restaurants or, if you’re fortunate, a stay in the hotel itself and thus access to the infamous skypark and infinity pool.

I’ve spent many days gazing at the structure, wandering amongst the shops in the mall or doing what all good tourists do, and take photos during the light show. I’d been told that the hotel was dated; not worth the money; and for Singapore where a new hotel seems to pop up on a frequent basis, this was no simple critique. However, the only way to find myself in the worlds highest infinity pool was to book myself info the hotel for at least a night.

The transfer from the airport to the hotel was, in typical Singapore style, swift and efficient. Sadly I arrived late afternoon on a Friday, just as it seemed the world was checking in for the weekend. Whilst the hotel reception desk boasts half a dozen staff, we were going nowhere quickly. Language skills seem to be high in demand on the front desk. Knowing there was another check in desk at tower 3, I enquired whether that queue was shorted. No, I was informed, at 5pm on a Friday, it had just closed for the day. Slightly odd policy. So the queue was tolerated. Once at the desk, staff were apologetic but the systems did seem to take a while given I’d booked online a couple of weeks previously.  Nearly 45 mins after arriving, I got my keys and escaped, desperate to freshen up after my flight and to catch up with friends. 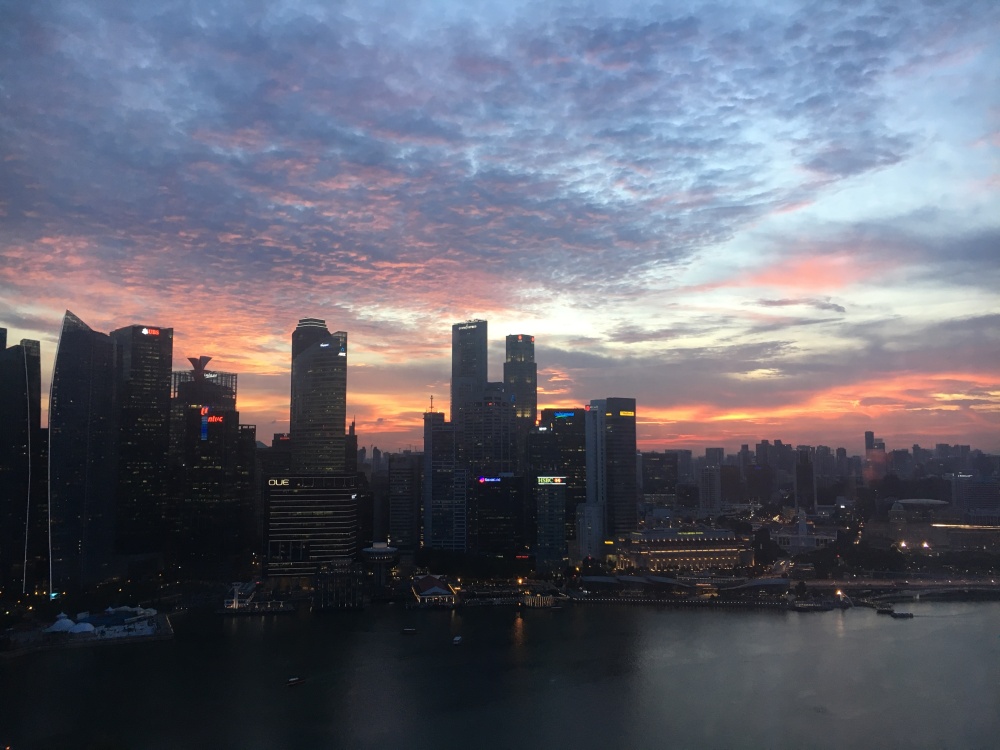 The room allocated was large, spacious and bright. Ok, and it also had the most amazing views over the marina. Tolerating the queue meant I’d been rewarded with an upgrade! Beds were big, comfortable and being as I was treating one of my besties to a stay, twins. The bathroom was equally as large and opulent with both a huge walk in shower and free standing bath. The AC was happily temperate and even though it took us a good few minutes to figure out how to turn all the lights off in the room, it was well set up and equipped. Beware though the auto mini fridge! Room service is efficient yet friendly and everything arrives with a smile. 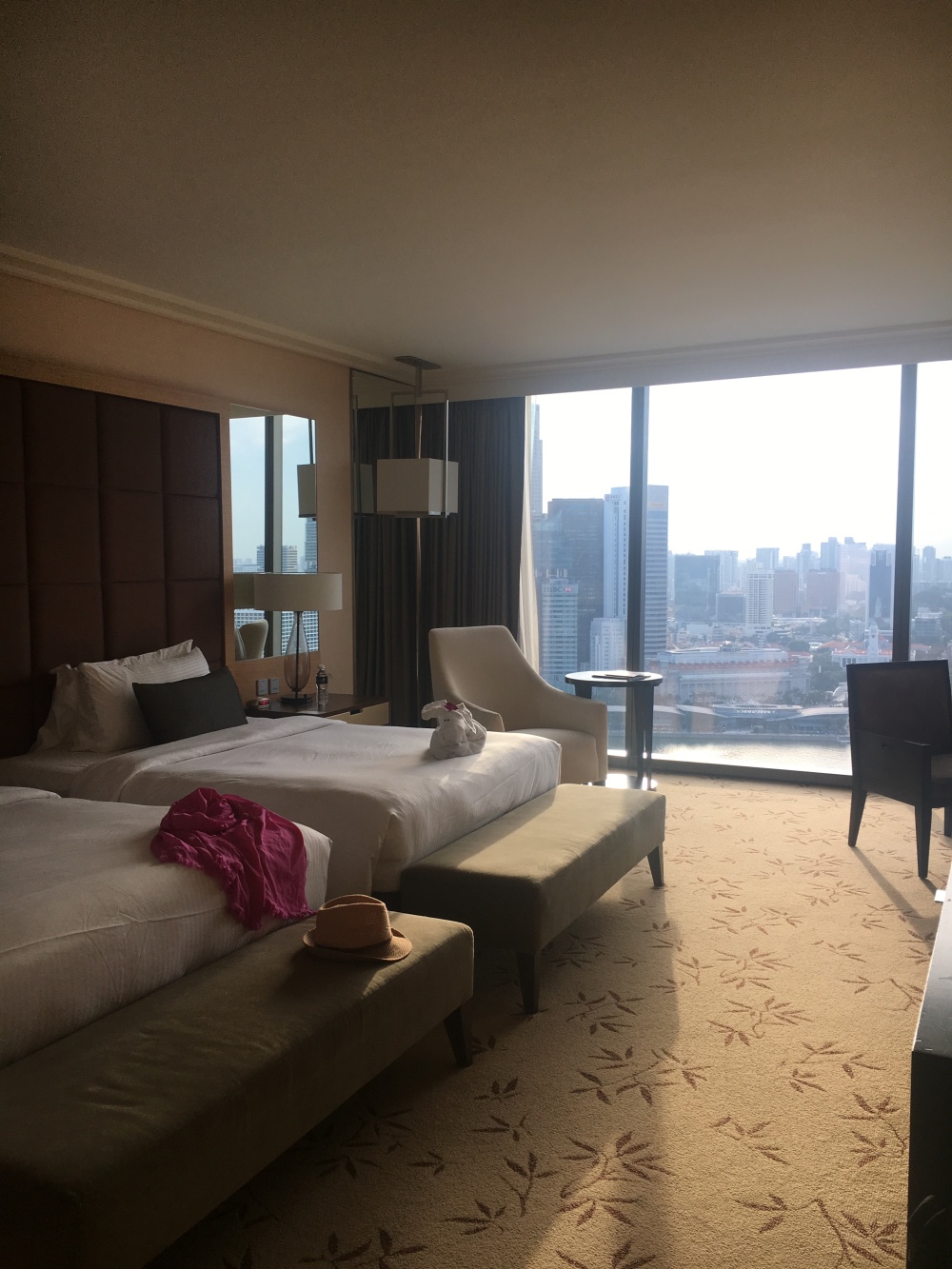 The whole raison d’etre for staying was the pool. Is it as good as your imagination? Well, frankly yes. Arguably the most Instagrammed pool in the world this pool sits at about 200m above Singapore and spans much of the three towers and despite the large room occupancy, never feels completely full – there is always space to take that photo which makes you look like one more step backwards and you’d fall over the edge. There’s some amazing engineering to ensure that moving grounds don’t have an impact (google it, it’ll be better explained than me) on the water levels and the super friendly, always ‘there when you need them but not when you don’t’ staff make towels, refreshments and taking of photos very easy. The food and beverage menu is limited and pricey, but what else do you expect from a pool on top of a 5-star hotel?!

Lifeguards keep a general eye on proceedings and the whistles are usually to remove people from the rear wall rather than anything more boisterous – although why people think sitting on (or putting small children on) that wall with nothing below you but Singapore is a good idea, beats me! Occasionally there are slightly over excited children, but if this is an issue, just move yourself to the pool which is child free. 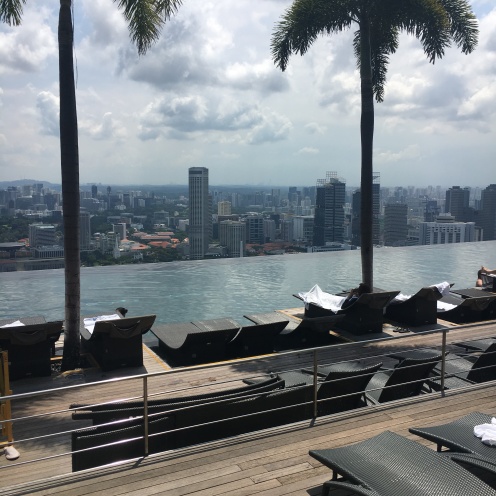 No, it’s not cheap, and arguably it’s not the most luxurious hotel in Singapore. But when you book in here it’s not the hotel and it’s rooms that you’re really paying for; it’s access to that pool. Is that worth it? Well yes, even if just once, for one night, to show your friends. 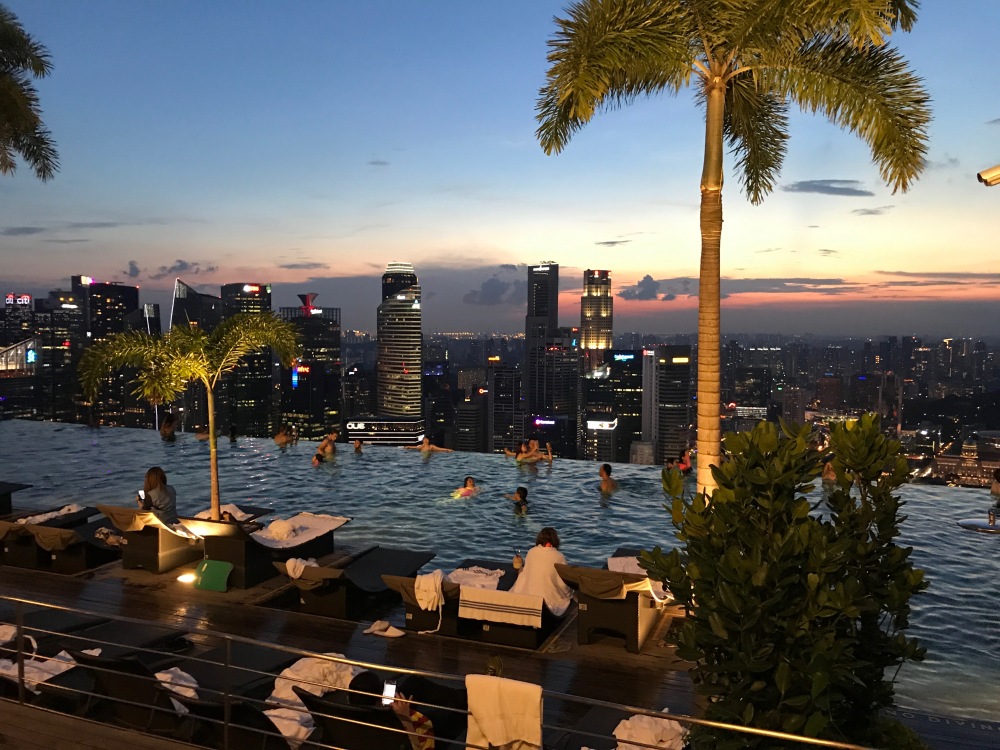