So, Cambodia and Siem Reap. It’s just like Angelina Jolie in Tomb Raider, right? Well, yes, there are lots of temples in one state or another, but there’s lots more to it than that.

How to get there?

The good news is that Siem Reap has its own airport which is only a 15-20 minute taxi ride from the main part of town. If you live in Asia then many carriers fly direct into Siem Reap, if you’re international then you’ll likely have to switch in Bangkok or Singapore.

There are lots of good quality hotels to choose from, but consider staying close to town….and a pool is a welcome relief after a day walking around temples. We stayed at the FCC, which is a small boutique hotel in a beautiful colonial building. Drinking cocktails in the bar watching the world go by and you feel as if you’re back in the hotel’s heyday. All rooms sleep 2 but we squeezed a third beds to our room, which was snug but not uncomfortable. For the extra space, go for the suite. Each looks out onto the pool, which is quiet until mid-afternoon when weary souls and tired feet make the most of the pool including the extensive drinks and food service.

Breakfast is included and is both of excellent choice and size. It definitely sets you up for the day. And if you’re leaving early for the temples, then breakfast to take away can be ordered.

Where to eat drink?

Cambodia has a range of food influences and the range of choices in Siem Reap are no exception. On Pub Street and it surrounds, you’ll find a vast array of options (and quality) from the obligatory Irish Bar, to BBQ, Italian and fusion.

My favourite was aha restaurant, an unassuming narrow looking restaurant just behind Pub Street in an alley. But enter here and you’re faced with a superb array of Cambodian cuisine with a modern European twist. Snake for starter? Yes if you’re here early enough. Amok was a favourite, but so were the fish cakes, pork and essentially everything else on the menu. You won’t be disappointed here. They also have a good wine list at reasonable prices. 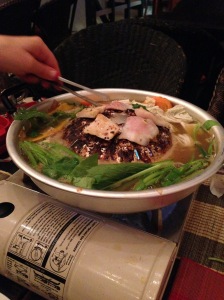 It is also worth paying a visit to the bar where Anglian Jolie spent time when in town filming Tomb Raider: Red Piano. The bar has a ‘Tomb Raider’ cocktail – cointreau, tonic, & lime. Every tenth cocktail ordered is free….

Probably the mail reason you’ve found yourself in Siem Reap is the UNESCO World Heritage Site of Angkor Wat. Angkor Wat was built in the first half of the 12th century (113-5BC) by King Suryavarman II, dedicated to Vishnu (Hindu). It’s construction is a symbolic representation of Hindu cosmology. Consisting of an enormous temple symbolising the mythic Mt. Meru, its five inter-nested rectangular walls and moats represent chains of mountains and the cosmic ocean. The temple is the heart and soul of Cambodia. It is the national symbol, the epicentre of Khmer civilisation and a source of fierce national pride. Soaring skyward and surrounded by a moat that would make its European castle counterparts blush, Angkor Wat is one of the most inspired and spectacular monuments ever conceived by the human mind. Unlike the other Angkor monuments, it was never abandoned to the elements and has been in virtually continuous use since it was built.

Angkor Wat is famous for its beguiling apsaras (heavenly nymphs). More than 3000 apsaras are carved into the walls of Angkor Wat, each of them unique. 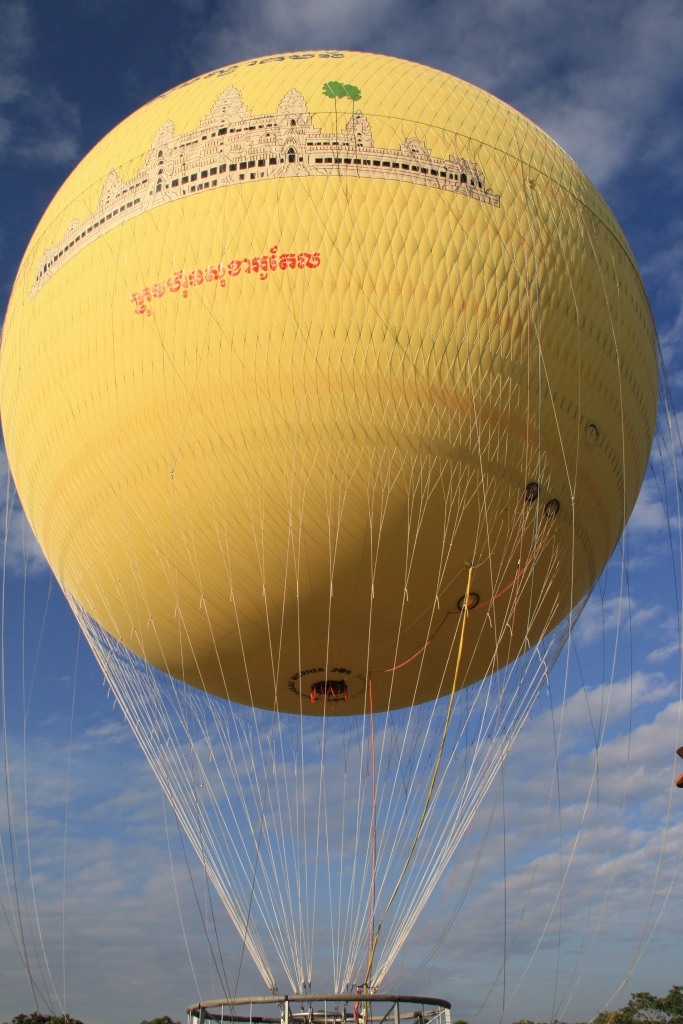 Sunrise over Angkor Wat is worthwhile rising at 5am for, although it will not be the tranquil, solitary experience you might imagine – there will be hoards of other people with the same idea and numerous rickshaws will zip up the road in the dark. If you do want to experience sunrise, then it is worth buying your park ticket the previous evening. If you buy after 5pm, then you will get the remainder of that day plus the whole of the next for the same cost. It will also save you queuing in the morning. 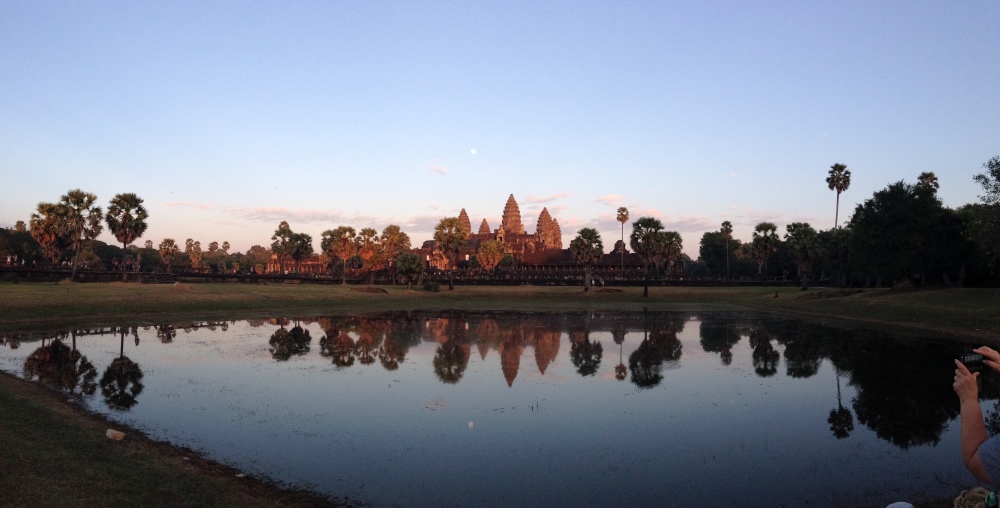 If an elevated angle of the site is what you’re after then there’s two choices. First is the steep climb up Phnom Bakheng. Arrive at the summit just before sunset for a panoramic view of Angkor and its environs. The golden hues of the setting sun on this vista are a memorable sightor hot air balloon flights. The second is a tethered balloon; it only goes up and down. This is due to flight restrictions over Angkor Wat. It costs US$15 per person, takes about 4 minutes to load the carriage, and you are in the air about 6-10 minutes, going up to about 200m. The carriage can hold 8-9 people and is on the road from the airport to Angkor Wat. Sunrise (around 06:10) is a popular time to go. There is another road besides the one going through the ticket gate, so you do NOT have to pay an Angkor entrance fee (it is outside of the park itself). Their number is +851 252 0810, limited English is spoken, but enough to tell you if the weather is allowing them to go.

Many of the tour groups follow the same path – Angkor Wat – Bayon – Ta Prohm. If you want a quieter experience, I’d recommend mixing this up and, if you’ve done sunrise at Angkor Wat, then heading straight to the Hollywood famous, Tomb Raider-esque, Ta Prohm. 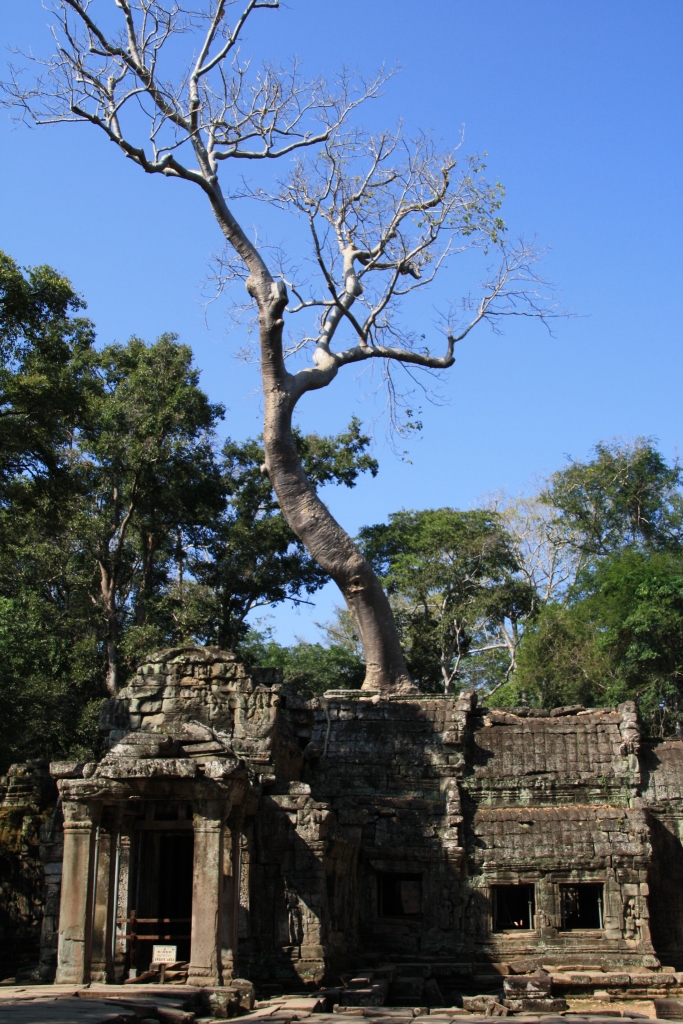 Unlike most of the other temples of Angkor, Ta Prohm has been largely left to the clutches of nature. With trees and vines growing through the ruins, the effect is striking, especially at the strangulating root formation on the inside of the easternmost gopura (entrance pavilion). Another popular site is the “Tomb Raider tree” in the central sanctuary, where Angelina Jolie picked a jasmine flower and was sucked beneath the earth.

Another iconic temple in the Angkor complex is Bayon. This site is worth visiting first thing in the morning when it is at its quietest. The Bayon’s most distinctive feature is the multitude of serene and massive stone faces on the many towers which jut out from the upper terrace and cluster around its central peak. The temple is oriented towards the east, and so its buildings are set back to the west inside enclosures elongated along the east-west axis. Because the temple sits at the exact centre of Angkor Thom, roads lead to it directly from the gates at each of the city’s cardinal points. The upper terrace is home to the famous “face towers” of the Bayon, each of which supports two, three or (most commonly) four gigantic smiling faces. In addition to the mass of the central tower, smaller towers are located along the inner gallery (at the corners and entrances), and on chapels on the upper terrace.

Siem Reap has all manner of goods to buy – from fresh fruit and food in the local market, to art, jewellery, handcrafted goods and general tourist goods. If you’re after something specific, or with an ethical background, it is worth asking at your hotel for recommendations.