A weekend in Stockholm. What to do? More importantly, where to eat?

A quick internet search showed me that Stockholm is absolutely a city for foodies, with 8 one-star and 1 two-star Michelin restaurants. There are also 9 Bib Gourmand restaurants (which in Stockholm is great) and 37 noted places to eat. So lots of choice. Naturally I started with those which are starred. Admittedly, this trip was booked with limited notice (well, there was a 4 day weekend and quite simply it was too good not to go somewhere), so I thought my chances of getting in anywhere were limited. Not so. I don’t know whether this was because it was Easter weekend, or whether I was just lucky with the one which really captured my fancy. Matbaren.

The Michelin Guide write up says:

“This popular hotel restaurant is both fun and charmingly run. The open kitchen specialises in flavoursome, well-balanced dishes from an appealing menu divided into the headings ‘From our country’, ‘From other countries’ or ‘From the plant world’. They keep some seats at the counter for those who haven’t booked.”

Matbaren is handily located in one, if not the, best hotel in Stockholm, The Grand. Yes, this is the place that Johnny Depp stayed shortly after the marital issues (yes, I know its a Daily Mail link; don’t judge me for that!), so it must be good. Plan then was for a drink or two in the hotel bar, and the wander on down to the restaurant for dinner. Perfect Friday night. The restaurant is under the umbrella of ‘celebrity’ chef Mathias Dahlgren. Until the end of 2016 the Grand Hotel was home to his Matsalen and Matbordet, with Matsalen being awarded a Michelin star only 9 months after opening. Announcing the closure, Dahlgren said:

Come 2017, Matsalen would have been in operation for 10 years and I have a strong desire to create a completely new restaurant. Right now we are experiencing an interesting development in Swedish restaurant culture and I want to continue to play an active part in that.

This guy isn’t about resting on his laurels and playing on his name as some ‘celebrity’ chefs do.

Travelling solo, knowing I could sit at the counter was an added bonus – afterall who wants to sit alone on a table with no interaction aside from someone  taking your order? The counter is always the better option – chatting to anyone next to you, plus the staff behind the counter.

This isn’t a post about the Grand Hotel, or the bar. However, it would be remiss of me not to mention: the beautifully appointed hotel; the spacious and luxurious bar (this is not a jeans and trainers kind of place, unless they’re super trendy) complete with piano; the incredible bar staff who, although busy managed to provide me not only with drinks and snacks (savoury before dinner and then mini chocolate eggs post dinner – the Easter bunny had apparently delivered in the interim!), but also conversation, points of interest and a general friendly ambiance. David, the English barman also helpfully showed me the quickest way from the bar to Matbaren which avoided the rabbit warren of corridors.

So, the main act. Matbaren.

It’s not a big restaurant by any stretch of the imagination. Maybe 35/40 covers at any one time, with a dozen sat at the counter. The kitchen is open behind the counter and all the staff speak English (some are expats). Food is served by either the chef (love this idea) or any of the wait staff – all of whom are aware of any food intolerances/allergies as well as a keen knowledge of the menus – both food and drink. Each setting comes with a small tray containing the menu, and a paper bag of freshly baked bread and divine salted butter. For those of you who have been out with me for a meal, you’ll know that I tend to avoid the bread, no matter how fresh as I simply want to savour the food. Here was my exception. There was no going past how good this was….in fact I was tempted to ask for a doggy bag of the bread and butter. 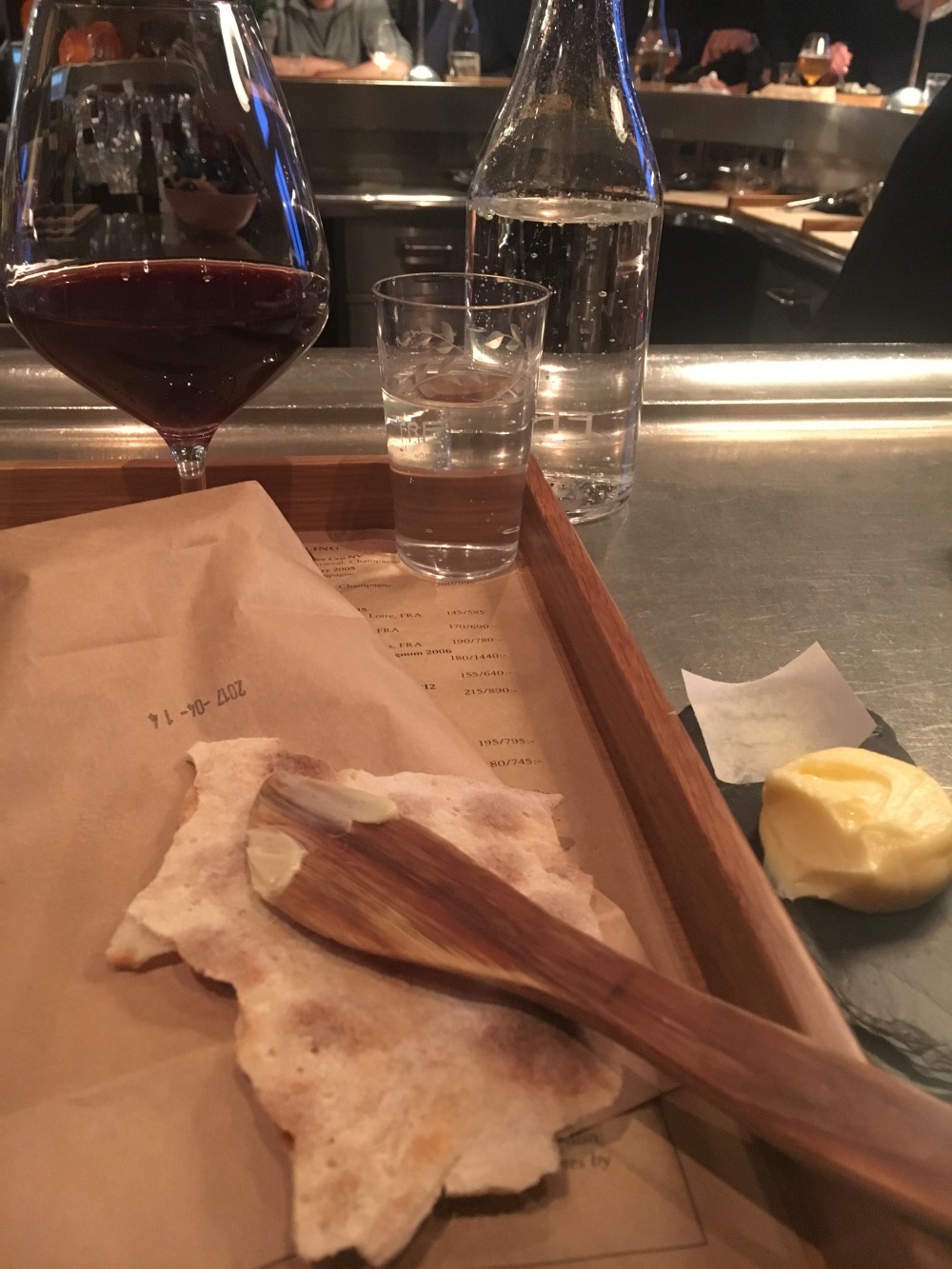 There’s no menus online because Matbaren changes its menu daily as they use fresh produce. However, they do consistently split their menu into local, overseas sourced and vegetarian/vegetables. The carnivores shouldn’t fear as there’s sufficient options for red and white meat including (on the day I was there): steamed pork buns (a house speciality), beef tartar (divinely tender), and lamb. The pescetarians reading this will positively rejoice, with a menu heavy with seafood, including: langoustines, ceviche, scallop sashimi, cod, crab…..and as for the non meat options, these are way above your usual green leaves or broccoli options you find in many places. No, here you get beetroots with raspberries, goats cheese and onion, or white asparagus and artichokes. You get the idea. It’s all simply amazing. Dessert is on a par. Exquisite. Whilst I was there, an American mother and daughter came in for dessert only. They were staying in the hotel and had eaten in the restaurant the night before but hadn’t managed to fit in dessert so they came back the following night. This is a good point. Matbaren serves small to medium sized dishes, which for someone like me who looks at a menu like theirs and wants EVERYTHING, as you can order dish by dish and only stop when you’re full. Which for me was after 4 plates; 3 main, 2 glasses of red, a dessert and a coffee. Unfortunately, that does leave several items on the menu that you haven’t managed to squeeze in. Maybe that’s the ploy so you want to go back? 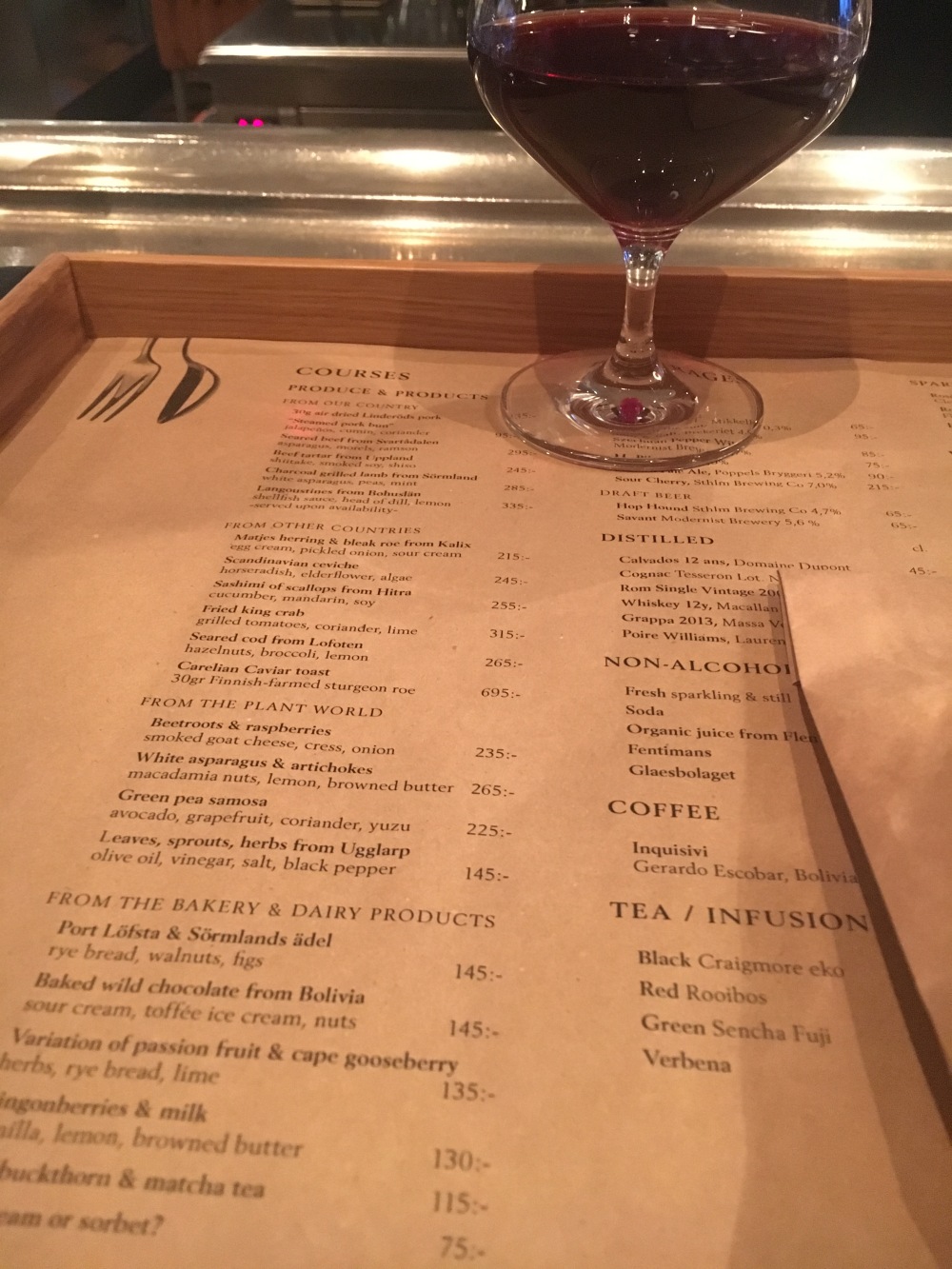 Plates are priced between 145-695SEK (roughly about 1:10 to GBP) which for a Michelin starred restaurant is great value. Wine comes by the glass or bottle and there is a great selection. It is Sweden so it is expensive, but the staff know what is in the cellars and are happy to provide you with a small taster if you’re not sure what you’re after.

In short, if you find yourself in Stockholm, either book yourself in here or wander in and check to see if they have space. You won’t regret it.